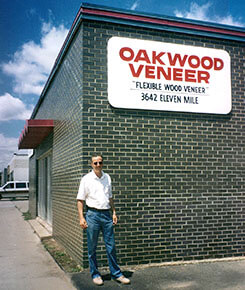 To keep costs down, Peter initiated Oakwood Veneer Company to purchase flexible wood veneers in large quantities. He stored it in his basement to start, but soon moved his veneer stock to a 5,000 sq ft warehouse on Rochester Road in Clawson, Michigan.

Oakwood Veneer’s first customers were, by and large, direct competitors to Evergreen Kitchens with whom Peter had developed friendly business relations.

Oakwood Veneer Company moved in 1994 to Eleven Mile Road in Berkley, Michigan to allow substantial growth by both Evergreen Kitchens and Oakwood Veneer. At this 15,000 sq ft location (right), Oakwood Veneer expanded the number of species available from a couple of dozen to more than 70. All wood veneers were available for same-day shipping across the nation. Due to increased customer demand, Oakwood Veneer increased the types of backers available to include 10-mil, phenolic, and NBL (no black line). In 1998, Oakwood introduced its top selling 22-mil Bubble-Free™ three-ply veneer.

We tripled our space in 2006 to serve you better

As the number of species offered expanded to more than 150, it was time to move the Oakwood Veneer headquarters to Troy, Michigan. In Oakwood’s current 45,000 square foot building, there is room to grow.

In 2007 Oakwood Veneer began to manufacture flexible wood veneer from raw flitch, becoming a manufacturer as well as a wholesaler. Architects and craftsmen can now precisely specify the species and finishes they want for special projects whether they are creating an extraordinary lobby or conference room or crafting a showstopping piece of furniture.

The number of wood veneer species available for immediate delivery continues to expand. It's well over 300 and counting. Most species are immediately available in multiple sizes and a variety of backers.

Through its first quarter century, Oakwood Veneer has stayed true to its core mission of providing an incredibly lavish selection of in-house, ready-to-ship flexible wood veneer for customers in North America and beyond. More ...